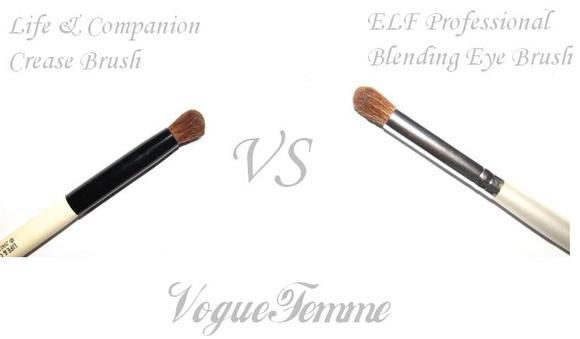 This time is a comparison of brush between Life & Companion Crease Brush and ELF Blending Eye Brush. I’ve already reviewed, the ELF Blending Eye Brush. Maybe not many of us are aware of the brush Life & Companion Crease Brush. This brush can be found in Carrefour Malaysia and they have quite a range of brushes but crease and eye shadow brush stands out the most. I already have a few eyeshadow brush so I opted only for the crease brush. Please bare in mind these brush are not available in all Carrefours. The one located in Jalan Peel, Cheras doesn’t have these brushes. I found them in Carrefour Subang Jaya and they have heaps of it there.

Life & Companion Crease Brush was priced at only RM8+. It’s short handled and suitable for traveling because it’s no bigger than a palm size unless you have a tiny pair of hand. The bristles are soft and gentle just like the ELF. As you can see in the picture, it’s tapered but the shape is not as tapered as ELF’s. ELF’s seems much more pointy while Life & Companion’s look much more rounded. However ELF brush makes a greater blending because of the density. Life & Companion’s may be able to still blend provided you know which edge of the brush use and because of it’s shape almost flat, it also could be eyeshadow flat top brush where you may stipple some eyeshadow.

Life & Companion Crease Brush picks up eyeshadow easily but during the application the eyeshadow outcome is much sheer than it suppose to be. Maybe because the brush is not dense enough and the eyeshadow application is not being concentrated but I guess that it’s suitable for those who wants washout  and lighter eyeshadow.

My verdict:
I would say that the ELF Blending Eye Brush is much better for blending and packing loads of eyeshadow but that doesn’t mean that I hate Life & Companion’s brush. I still like it because at times I may not want to have the eyeshadow intensity but just a sheer color for simple look. I guess it depends on what you’re looking for. Most of the time I use ELF’s because I could use only that brush for my whole eye makeup from packing and blending to highlighting brows. It just saves time when your time is limited.