Well, I have been excited and waited for a very long for this fashion rave. Jowie, Fyda and I have been waiting since 5 p.m. to queue for the goodie bag. The events starts at 7 p.m. and waiting in the queue is really tiring. While waiting in the line, there’s two girls wearing CLEO Fashion Rave Tag approached me. They have picked me to be the candidate of Luscious Hair Award. Haha! I was very excited and they took down some basic details of mine. They told me to register at the VIP counter at 7:30 p.m. I was really happy as I was looking forward for award but I never thought it could be that fast. I was really excited!!! 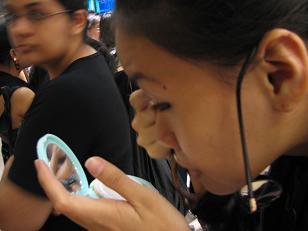 Fyda, touch-up on her make-up

The time has tick to 7 p.m. and the barriers has not been removed. No one has yet to receive any goodie bag. Waiting in the line was already tiring and now they are late? They have started giving goodie bags at around 7:30 p.m. and that’s almost half and hour late.Since I have to register myself at the VIP counter, I was entitled to get VIP seats. WOW! But what about Fyda? I don’t want to leave her behind. I have been bothering those girls to get passes for Fyda too but they wouldn’t allow at all. After much pondering around figuring to get Fyda in, we are clueless. Later, there was a uncle approach asking us for ways to get in when he was invited to go to the event. Jowie politely how to get to the counter. Later, we all decided that I should enter the premise. Suddenly I saw Fyda came in not long after. I was like,’how did you get in???’. She told me that the uncle that approach us earlier had only three person but they have four passes. So now, Fyda gets in!!! Thank you Uncle! At least, I don’t need to feel bad about leaving her behind. I was pretty sad that Jowie had to leave for family dinner after taking the goodie bag. I thank him to for being nice to the uncle, if not Fyda probably be standing at Coffee Bean Cafe because there’s no seatings at all. Thank you so much sweetheart!!! You deserve my warm kisses afterall. 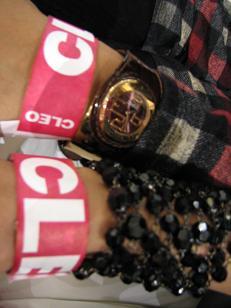 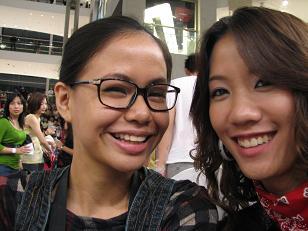 Fyda and I at the VIP premise

The show goes on starting with performance. What I find annoying is the artist keep going around the models and its so difficult to see and snap shots of the model only. Moreover, the models pose for not long at all. One thing unique is the fashion uses solid bright colors, that’s my liking! They then move on with lcuky draws, I was wishing and telling Fyda that she’ll never know if she wins. I keep repeating her name and she was telling if its really her, she is not going up at the stage at all. Then for this one last time, I have repeated her full name. It echoed at those big speakers. She really did won a lucky draw she was so lucky!!! I’m so happy for her!!! However, the sad thing is she didn’t have to go up the stage. I find this is ridiculous as they are picking lucky draw winners and winners didn’t get to go up the stage? Winners have to go to the counter where all the line started earlier. What was that? Anyway, my dear bestie won a Cash Prize RM100 Maybelline. At first I thought it was a voucher, later on she told me that she has to go to CLEO’s office to redeem the hamper. I was like WHAT? Why can’t they brought it over to the event? Wouldn’t that be a little more easier? Anyways, I can’t wait to see what’s in the hamper. So that we are able to do reviews on it! 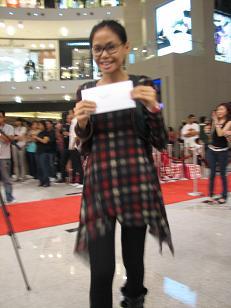 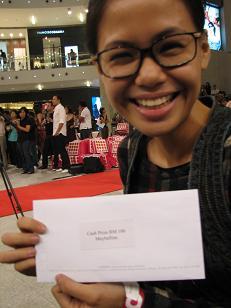 As for me, I wasn’t as lucky as her. I didn’t win anything at all. They said that they did the judging by looking at pictures, but I think they are lieing. I was nominated but nobody actually took my picture  when I was approach by the CLEO girls. I’m sorry to say but the winner for Luscious Hair Award, her hair looks a little bit damage than the lady emcee. I was thinking that the event ran out of schedule, therefore time was running out and simply randomly pick a winner. After the was event over, they gave out more goodie bag when everyone is leaving. Only first 1000 readers presents their ticket, then they are entitled to get a goodie bag but it looks like that number can’t be reach. Another thing I find it dissapointing is, although readers brought their ticket, the ticket only gives them to get a goodie bag but a place upclose in the event than the publics? They didn’t have it afterall. I think those readers who came out with the tickets deserves a zone for themselves rather than scatteredly standing outside the VIP premise. Some were just standing and sitting at the stairs. They paid to purchase CLEO magazine at RM5.90 and I think they should deserve more than just sitting and standing all over. Don’t you?
xoxo,
Traclyn Yeoh